Behind the scenes with The Game Changer: Cover design

Many years ago, my game-changing partner (whom I call Amber in The Game Changer) talked to a therapist about why she felt lonely and isolated. Her therapist told her there was nothing wrong with her: she felt alienated from others because she was a giraffe surrounded by alligators.

No matter how well-intentioned alligators are, they can not understand or relate to giraffes. Giraffes and alligators have very different needs and live very different lives. An alligator might sincerely reach out to a giraffe—by offering it a bit of meat torn from the carcass of some unlucky water buffalo, say—but that isn’t likely to help the giraffe much.

Amber was my giraffe. She was the first person I knew who really got me in a way my other partners never had. It turns out, I have a bit of giraffe in me, too.

While I was working on The Game Changer, I had an idea in my head about what the book would look like. And I wanted the cover to have a giraffe on it. So, midway between the second and third drafts, I designed a cover concept, something our book designer might use as a jumping-off point:

The cover designers, J. W. Salter and Val Heimpel, started from this design and explored some ideas thematically similar to my concept. J.W. suggested a more descriptive subtitle than “a memoir,” which turned out to be more challenging than I anticipated. Eve and I struggled with ideas for the subtitle for a while, before we eventually arrived at “a memoir of disruptive love.” That is, when all is said and done, what this book is about: the relationship that comes along and flips life upside-down.

Armed with this new subhead, the designers came up with a design based loosely on mine:

However, we soon ran into problems. J.W. pointed out the link between the giraffe and the subject of the book was very tenuous at best. Did “game” mean “big game?” Was this a memoir of an African safari? We explored an alternative on this theme that made the alligator/giraffe metaphor more explicit. The result was interesting, but not something that really captured the flavor of the memoir. While we all loved this one visually, it was more suggestive of a popular science book than a memoir: 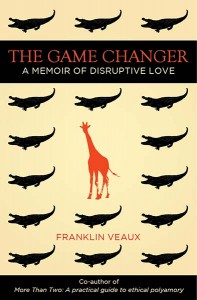 In the book, I talk about Amber as a dragonslayer. I talk about the way she has dedicated her life to pure research, and how she is working on solving some of the most difficult medical problems humanity is currently faced with. A variant of the cover explored this metaphor as well.

In the end, the designers felt the book was geeky enough it needed a different style of cover. These designs all fail to convey the essence of the book: its relentless geekiness and the feeling of disruption in my life during the time I write about. He felt that the cover needed to be more evocative of these themes, so he opted to go in an entirely different direction, one that I think works really well.

This cover expresses, I think, many of the themes of the book–not just my lifelong obsession with computers and tech, but also the idea of disruption and upheaval. I like the way the glitchiness of it conveys the notion of a sudden and cataclysmic change in what had been, until I met Amber, an orderly—if constrained and questionably ethical—life.

There is something to be said for letting experts do what they’re good at.