Of Puppies and Favorites

One of my partners has a dog, a pet poodle named Emma. Some time ago, her poodle had a litter of puppies. It turns out that puppies are quite a lot of work; there were seven in the litter, so they required care from us as well as from the mama poodle. One evening, when we were feeding puppies, she was making fun of me. Every time I took a puppy into my lap, I said, “You know, I think this one might be my favorite.” And meant it. 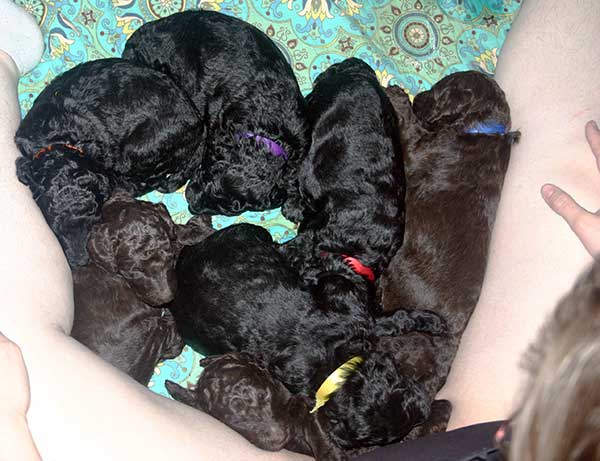 When they were young, before they had new homes, we referred to them by the color of their collar. We debated naming them after computer programming languages (“Here, Java! C’mere, Perl! Good boy, Python!”), but my sweetie made the point that we didn’t want to give them names that might unduly influence whoever adopts them.

And they were all my favorite puppy.

Purple is absolutely my favorite of the whole bunch of them. She is lovely; we’ve informally started referring to her as “sweet face,” because she has such a nice face. She’s affectionate and loving, nuzzling into you when you hold her. She gazes soulfully into your eyes when you feed her. For the first couple of weeks, she would sing herself to sleep after she ate.

My real favorite, though, is Blue. He’s the largest of the bunch, a gentle giant who is gregarious and outgoing. He responds strongly to people, coming over with his tail wagging whenever anyone walks near. He’s filled with energy and enthusiasm, and joy just radiates out of him.

But my favorite out of all of them would have to be Yellow. He is by far the most playful of the bunch. He enjoys rolling the ball around his pen, which is incredibly cute, and he likes playing with his imaginary friend, which is even more cute. He’s smart and companionable and loves wrestling with people.

When it comes to my favorite puppy of the litter, though, that would have to be Pink. She’s quiet and sweet-tempered, a cuddly and affectionate little girl who loves reaching up to kiss your nose. She is absolutely heart-melting in her trusting devotion to the people around her.

Though, to be honest, I think my favorite might be Green. He’s smart, strong-willed, and opinionated. He bounds around the pen wrestling with his brothers and sisters, and any human who will show him attention—“C’mon! I can take you! Let’s go! Arooorooroo! Isn’t this FUN?”

My favorite puppy would doubtless be Red. She is mercurial, one minute playful and the next minute snuggly. She also loves to gaze into your eyes while she eats, and her favorite thing in the world is to fall asleep with her head on your arm. She’s a master of the game “I’ve Got Your Nose,” which she plays with Blue, Green, Yellow, and any person who gets close enough.

And finally, I’ve saved my favorite puppy for last. Orange is sweet-tempered and loving; she bonds easily with people, to the point that she often prefers scritches and snuggles to food. Ever since the day she was born, one of her favoritest of all things is to snuggle into the crook of your neck and fall asleep there, making contented little noises the whole time.

This is, you see, why I’m rubbish at monogamy. Pick just one? When there is a whole world out there, full of joy and love and life? Why would someone want to do that?