From here to there: Developing a mindset of abundance

I am blessed today with a life that is extraordinarily filled with love and connection. I find it easy to connect with people and to find love, warmth, and intimacy, and that has let me create a rich, joyful personal life in which I feel cherished and supported.

In the book More Than Two, Eve and I talk about the abundance model and the scarcity model of love. We say,

In the starvation model, opportunities for love seem scarce. Potential partners are thin on the ground, and finding them is difficult. Because most people you meet expect monogamy, finding poly partners is particularly difficult. Every additional requirement you have narrows the pool still more. Since relationship opportunities are so rare, you’d better seize whatever opportunity comes by and hang on with both hands—after all, who knows when another chance will come along?

The abundance model says that relationship opportunities are all around us. Sure, only a small percentage of the population might meet our criteria, but in a world of more than seven billion people, opportunities abound. Even if we exclude everyone who isn’t open to polyamory, and everyone of the “wrong” sex or orientation, and everyone who doesn’t have whatever other traits we want, we’re still left with tens of thousands of potential partners, which is surely enough to keep even the most ambitious person busy.

The sneaky thing about both models is they’re both right: the model we hold tends to become self-fulfilling.

But we don’t really describe how to get from a mindset of scarcity to a mindset of abundance. When you start with a scarcity model, your experience will be one of scarcity—so how can you even imagine that love is abundant, let alone begin to internalize a model of abundance?

I’ve been thinking about that a lot.

I get email from my polyamory site. Lots of email. Far too much email for me to be able to respond to all of it, and sometimes I feel guilty about that. The emails sit in my inbox, making me feel like a bad person for not having time to reply to every one. (That’s partly why we wrote the book.)

Each of those emails is different, but they often fall into broad themes. I get emails from people whose spouses are cheating, and want to know how they can turn an affair into an ethical open relationship. I get emails from from people who have hit turbulence in their journeys and want to know if I can give them the magic words of wisdom to solve the problems they face. And I get emails—many of them—from people who really, really want to have more than one partner—or even just one partner!—but can’t seem to attract anyone, no matter how hard they look, no matter how much effort and time and energy they pour into the search.

And I get emails from the flat-out incredulous. “Why on Earth would you want more than one partner?” they say. “It takes huge investments of time, energy, effort, commitment, and resources just to find one lover! I can not imagine how much it would take to find more than one!”

What’s interesting about that is it has not been my experience that finding love takes time, energy, effort, commitment, or resources…at least not in the way people seem to mean when they say things like this. Quite the reverse, in fact. Opportunities for love and connection are so abundant that they tend to waltz in the front door at the most inconvenient times. I live in a world of abundance. But how did I get here?

Right now, I’m sitting in a remote cabin deep in the heart of Washington State’s temperate rainforest—the very same one where we wrote the first draft of More Than Two. I’m here working on a new book, a memoir of my life called The Game Changer. I spend a good part of every day sitting in front of an enormous stone fireplace with a cup of tea at my side while Whiskers, the cabin kitty, sprawls on my lap or paces up and down by the window watching the birds at the feeders outside.

As I work on the memoir, I’ve been revisiting the person I used to be, writing stories about my early, fumbling experiences with polyamory and all the many things I got wrong. And I’ve realized that I started with a starvation model of relationships, and over the years, that starvation model has become an abundance model.

It wasn’t always this way. For a long time, I had trouble just finding friends, so the notion of finding a girlfriend seemed as remote as the notion I might quit my job and climb the Himalayas. I could not understand how to get a woman to want to be with me, so I did exactly the wrong thing. I tackled it the way I would tackle a computer programming challenge. I looked at women as a puzzle to be solved: How do you get a woman to become your girlfriend? What steps do you use to get a woman to love you?

That made me clumsy. I came across as entitled and desperate. I accepted anyone who showed me even the slightest hint of interest, no matter how mismatched we were, no matter how little we had in common.

It took time, energy, effort, commitment, and resources to get to the point where love and connection are so plentiful. But I never invested time, energy, effort, commitment, or resources in the process of searching for love—at least not directly. Instead, somewhere around the time I started thinking about being an ethical person and what that might mean, I began investing that time and effort in myself, in becoming the best version of me that I can be.

I wasn’t doing it to find love. I was doing it because my relationship with Shelly showed me there was something fundamentally broken in the way I had approached my relationships in the past: that in trying to do whatever I could to honor my “primary” relationship, I was being dishonorable to the other people close to me.

So I started spending time, energy, effort, commitment, and resources in becoming secure in myself. I began working to understand my own fears and insecurities and eliminate them. (If there’s a figurative monster living under my bed, I said, I’m not going to hide from it any more—I’m gonna make that fucker pay rent!) I made a conscious choice to live with honesty and integrity, even when being honest was hard.

Doing that meant I had to spend time and effort learning good communication skills, even when (in fact, especially when) I was faced with talking about things that were hard to talk about. It meant I had to battle the parts of me that feel shame or embarrassment about who I was, and become a person who lived life openly and on my terms without compromise. It meant I needed to learn understand my needs. It meant I had to develop tools of good partner selection, so I could choose partners who fit well with me instead of believing that I had to accept anyone who showed interest in me. (I can’t overemphasize how huge this was. Choosing partners whose goals and needs were aligned with my own did more, in one stroke, to eliminate the problems that caused me to sacrifice my own needs for the needs of a partner than any other single factor. Looking back, it seems obvious…but when I was in the middle of all this, it was anything but.)

It meant learning that other people are real and that it’s important to interact with them as human beings, not as things for me to try to get my needs met with. It meant becoming a self-confident person. It meant learning and accepting that I make mistakes, and other people do too, and that’s okay; we are all born of frailty and error and if we are to share this world with one another, the first fucking rule of existence is that we must pardon reciprocally one another’s failings and seek wherever possible to treat one another with compassion.

And that was the turning point. That was when I started to realize that love is abundant. It made me understand that I don’t need to have a desperate, starvation model of love that says love is scarce and hard to find and I have to spend my time and effort and energy searching for it. Understanding that love is abundant made me calm down about love; when you think love is all around you, you don’t freak out about trying to find it. People noticed that, too, and opportunities for love and connection grew even more.

It seems to me that yes, you do need to spend time, energy, effort, commitment, and resources finding love…but if you direct those things outward, in the pursuit of love, you’re not likely to have great success. Turn those things inward. Spend them on yourself. Become the best, most secure, most confident, most kind, most compassionate, most honest version of you. Do that, and love will follow in abundance. 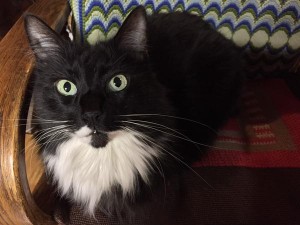