A pigeon in a hole

A few years back, my partner Eve Rickert and I wrote a book. You may, if you’re reading this blog, have heard of it. It’s about polyamory, and it’s called More Than Two.

In the book, we said, “We’re not experts on polyamory. We believe there are no experts. Polyamory is still too new for that.” The book did rather well, and as a result, a lot of people turn to us as those poly experts of expert polydom who can tell you how it’s done.1

We’re not poly experts because, err, there are no poly experts. As Eve likes to say, we’re artists: More Than Two resonates with people not because we’re the gurus on the mountaintop handing down the poly wisdom, but because we’re writers who can talk about our own experiences in ways that some folks connect with.

Did you know that we write about more than just polyamory? It’s true!

In fact, we have another book coming out this fall. It’s a novel, and it’s not about polyamory. Indeed, there’s not a whisper of polyamory in it.

So what is it, then? Well, imagine a quasi-steampunk alternate past in which Queen Victoria never existed, the Protestant Reformation never happened, there’s no British Empire, Dr. Frankenstein succeeded with his experiments (sort of), and the British don’t drink tea.

Then make it a comedy in the style of or Terry Pratchett’s Discworld books.

Only with a higher body count.

How’s that for jumping out of the pigeonhole?

Anyway, as we did with More Than Two, we’re crowdfunding this book. It’s called Black Iron. It publishes this fall, but you can get an early copy of it if you like. Plus, we have all sorts of other fun stuff, like posters and T-shirts and other goodies. And today, we’re repeating a stunt I did back in 2015 when we crowdfunded The Game Changer: from noon to midnight, Eve or I will write a blog post for every crowdfunding contribution we get in that window. We’ll keep writing as long as you keep backing, or until we drop. And for contributions over $100, you can suggest a topic. Follow along by RSVPing to our Facebook event or following the #WLAMF hashtag on Twitter.

There is, of course, a downside to not being pigeonholed. When you fit safely in your hole, people know what to expect of you. When you don’t, they don’t. “Well, yes, you can write a good book on polyamory, but can you write fiction?” I hear you saying.

It’s a fair question. I think the answer is yes. You can check out an excerpt from Black Iron and see if you agree.

We have a lot more books inside us. Some of them won’t easily fit into pigeonholes.

To be fair, we never intended to write Black Iron.

There’s a funny thing that happens when it comes to creation. Sometimes, it seems like the thing you’re creating wants to be created. It’s as if there is a universe of books out there, waiting to be written, and occasionally they find their way into our world through the head of some person somewhere.

That’s the way it was with More Than Two. Not to sound superstitious, but it feels like that book wanted to be written, and we were the conduits between that universe-space where unwritten books live, and the real world.

That happened with Black Iron. It pushed its way into this world even though we had other plans. So it goes.

There are a lot more books trying to be born right now. There’s a vast universe of unwritten books clamoring to be written. I invite you to explore with us.

1 Along the way, some folks have apparently started using More Than Two as a blunt instrument against other folks—”You need to do thus and such because Eve and Franklin say so!” Please don’t do that. 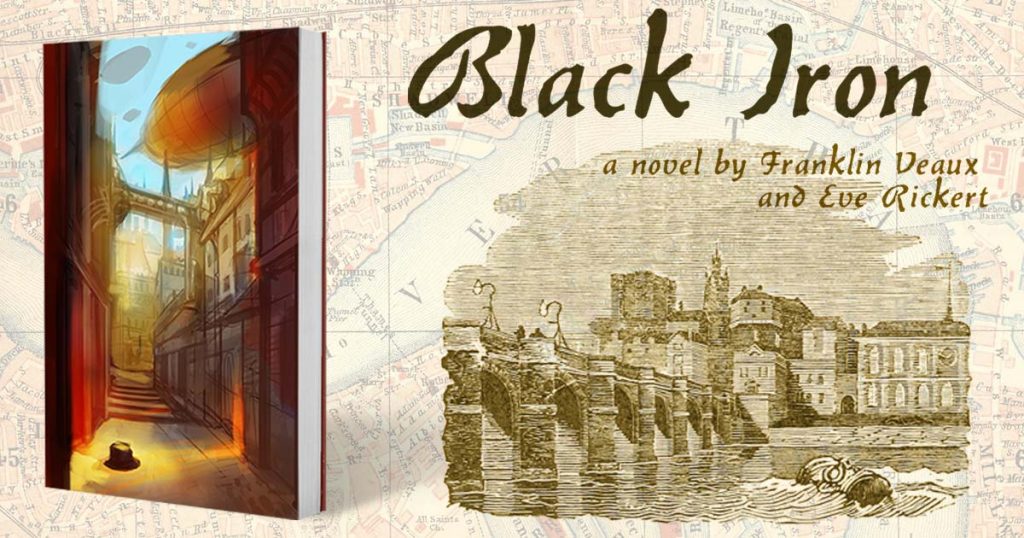